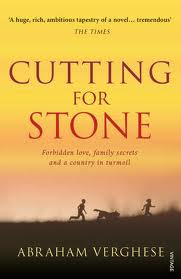 This counts for 2 Reading Challenges:

What’s in a name

*Ah ah, can you see I followed Audiobook Week this year? Now on, I’ll include the name of the narrator when I review an audiobook!

I enjoyed every minute of it. I would not go and live in Africa, but I admit, the descriptions of the Ethiopian landscape were breath taking and very attracting. I know nothing about medicine, but it seems I learned a lot through this book, though the technicalities are always set in an either humorous or tragic context that does not make these passages boring at all.

The plot is so good, sounds so real to life: when you think you have figured it out, you come to a sudden turn, and you end up not where you thought you would. Without spoiling anything, I think I can say that I knew the boys would meet their dad, but he showed up when I had almost forgotten about him.So real to life that I had to go and check if this was really a novel or a kind of biography! I am really looking forward to more novels by this author.

I enjoyed also very much all that was related to the relationship between the twins, very deep.

The narrator was excellent, he had the perfect accent(s) for this book.

Marion and Shiva Stone are twin brothers born of a secret union between a beautiful Indian nun and a brash British surgeon at a mission hospital in Addis Ababa. Orphaned by their mother’s death in childbirth and their father’s disappearance, bound together by a preternatural connection and a shared fascination with medicine, the twins come of age as Ethiopia hovers on the brink of revolution. Yet it will be love, not politics—their passion for the same woman—that will tear them apart and force Marion, fresh out of medical school, to flee his homeland. He makes his way to America, finding refuge in his work as an intern at an underfunded, overcrowded New York City hospital. When the past catches up to him—nearly destroying him—Marion must entrust his life to the two men he thought he trusted least in the world: the surgeon father who abandoned him and the brother who betrayed him [Goodreads]

Abraham Verghese, MD, MACP, is Professor for the Theory and Practice of Medicine at the Stanford University School of Medicine and Senior Associate Chair of the Department of Internal Medicine.

Born of Indian parents who were teachers in Ethiopia, he grew up near Addis Ababa and began his medical training there. When Emperor Haile Selassie was deposed, he completed his training at Madras Medical College and went to the United States for his residency as one of many foreign medical graduates. Like many others, he found only the less popular hospitals and communities open to him, an experience he described in one of his early New Yorker articles, The Cowpath to America.

From Johnson City, Tennessee, where he was a resident from 1980 to 1983, he did his fellowship at Boston University School of Medicine, working at Boston City Hospital for two years. It was here that he first saw the early signs of the HIV epidemic and later, when he returned to Johnson City as an assistant professor of medicine, he saw the second epidemic, rural AIDS, and his life took the turn for which he is most well known ? his caring for numerous AIDS patients in an era when little could be done and helping them through their early and painful deaths was often the most a physician could do.

His work with terminal patients and the insights he gained from the deep relationships he formed and the suffering he saw were intensely transformative; they became the basis for his first book, My Own Country : A Doctor’s Story, written later during his years in El Paso, Texas. Such was his interest in writing that he decided to take some time away from medicine to study at the Iowa Writers Workshop at the University of Iowa, where he earned a Master of Fine Arts degree in 1991. Since then, his writing has appeared in The New Yorker, Texas Monthly, Atlantic, The New York Times, The New York Times Magazine, Granta, Forbes.com, and The Wall Street Journal, among others.

Following Iowa, he became professor of medicine and chief of the Division of Infectious Diseases at Texas Tech Health Sciences Center in El Paso, Texas, where he lived for the next 11 years. In addition to writing his first book, which was one of five chosen as Best Book of the Year by Time magazine and later made into a Mira Nair movie, he also wrote a second best-selling book, The Tennis Partner : A Story of Friendship and Loss, about his friend and tennis partner?s struggle with addiction. This was a New York Times’ Notable Book [Goodreads]

Ah ah, another writer who’s been through the Iowa Writers Workshop! I really enjoy those, such as Benjamin Hale  and Lan Samantha Chang – click on the links to read my reviews of their last books.

“A winner. . . . Filled with mystical scenes and deeply felt characters. . . . Verghese is something of a magician as a novelist.”
—USA Today

“A masterpiece. . . . Not a word is wasted in this larger-than-life saga. . . . Verghese expertly weaves the threads of numerous story lines into one cohesive opus. The writing is graceful, the characters compassionate and the story full of nuggets of wisdom.”
—San Francisco Chronicle

“Absorbing, exhilarating. . . . If you’re hungry for an epic . . . open the covers of Cutting for Stone, [then] don’t expect to do much else.”
—The Seattle Times

“Wildly imaginative. . . . Verghese has the rare gift of showing his characters in different lights as the story evolves, from tragedy to comedy to melodrama, with an ending that is part Dickens, part Grey’s Anatomy. The novel works as a family saga, but it is also something more, a lovely ode to the medical profession.”
—Entertainment Weekly

“Here is an extraordinary imagination, artfully shaped and forcefully developed, wholly given in service to a human story that is deeply moving, utterly gripping, and, indeed, unforgettable. . . . As noble and dramatic as that ancient practice—medicine—that lies at the heart of this magnificent novel.”
—John Burnham Schwartz

“Verghese plays straight to the heart in his first novel, which will keep you in its thrall.”
—People

“A marvel of a first novel. Verghese’s generosity of spirit is beautifully embodied in this gripping family saga that brings mid-century Ethiopia to vivid life. The practice of medicine is like a spiritual calling in this book, and the unforgettable people at its center bring passion and nobility—not to mention humor and humility—to the ancient art, while living an unforgettable story of love and betrayal and forgiveness. It’s wonderful.”
—Ann Packer

“[An] astonishing, breath-taking and heartrending human epic. . . . A perfectly pitched, endlessly rewarding symphony of a debut novel. If you have time to read only one novel this year, make it this one.”
—Newark Star-Ledger

“Verghese’s achievement is to make the reader feel there really is something at stake—birth, love, death, war, loyalty. . . . You conserve pages because you don’t want [the book] to end.”
—The Guardian (UK)

And with this book, I have now completed my 2nd challenge of the year! See my My Reading Challenges page.