Lords of the North: A Novel 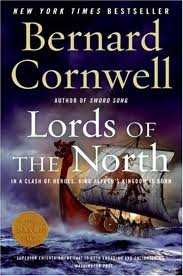 I am totally hooked by this series and by the fascinating character of Uhtred. I have seen some reviewers don’t like too much Uhtred’s reaction to the Christian religion, but it seems fair to me in the context of the time, and with the struggle with paganism. Plus it is alas historically proved that Christian hierarchs of the time were very far from being great and fair. In this volume, I like how Cornwell manages to get a mix of violence and romance! And always, how Uhtred is torn between different allegiances, about what he feels is his duty and what he feels is his own inner call to go back to recover the place of his ancestors.

From Bernard Cornwell, the undisputed master of historical fiction, hailed as “the direct heir to Patrick O’Brien,”* comes the third volume in the exhilarating Saxon Chronicles: the story of the birth of England as the Saxons struggle to repel the Danish invaders.

The year is 878, and as Lords of the North begins, the Saxons of Wessex, under King Alfred, have defeated the Danes to keep their kingdom free. Uhtred, the dispossessed son of a Northumbrian lord, helped Alfred win that victory, but now he is disgusted by Alfred’s lack of generosity. Uhtred flees Wessex, going north to search for his stepsister, who was taken prisoner by Kjartan the Cruel, a Danish lord who lurks in the formidable stronghold of Dunholm.

Uhtred arrives in the north to discover rebellion, chaos, and fear. His only ally is Hild, a West Saxon nun fleeing her calling, and his best hope is his sword, Serpent-Breath, with which he has made a notable reputation as a warrior. He needs other partners if he is to attack Dunholm, and chooses Guthred, a seemingly deluded slave who believes he is a king. Together they cross the Pennines, where fanatical Christians and beleaguered Danes have formed a desperate alliance to confront the terrible Viking lords who rule Northumbria.

Instead of victory Uhtred finds betrayal. But he also discovers love and redemption as he is forced to turn once again to his reluctant ally, Alfred the Great. It is Alfred who sees opportunity in Northumbria’s chaos, and Alfred who looses Uhtred and his stepbrother, Ragnar, onto Dunholm, the invincible fortress on its great spur of rock. A breathtaking adventure, Lords of the North is also the story of the creation of England, as the English and Danes fight against each other, but also find common cause and create a common language. In the end they will become one people, but as Uhtred will discover, their union is forged through the white heat of battle. [goodreads]

Cornwell was born in London in 1944. His father was a Canadian airman, and his mother was English, a member of the Women’s Auxiliary Air Force. He was adopted and brought up in Essex by the Wiggins family, who were members of the Peculiar People, a strict Protestant sect who banned frivolity of all kinds and even medicine. After he left them, he changed his name to his mother’s maiden name, Cornwell.

Cornwell was sent away to Monkton Combe School, attended the University of London, and after graduating, worked as a teacher. He attempted to enlist in the British armed services at least three times, but was rejected on the grounds of myopia.

He then joined BBC’s Nationwide and was promoted to become head of current affairs at BBC Northern Ireland. He then joined Thames Television as editor of Thames News. He relocated to the United States in 1980 after marrying an American. Unable to get a Green Card, he started writing novels, as this did not require a work permit.

As a child, Cornwell loved the novels of C.S. Forester, chronicling the adventures of fictional British naval officer Horatio Hornblower during the Napoleonic Wars, and was surprised to find that there were no such novels following Lord Wellington’s campaign on land. Motivated by the need to support himself in the U.S. through writing, Cornwell decided to write such a series. He named his chief protagonist Richard Sharpe, a rifleman involved in most major battles of the Peninsular War.

Cornwell and wife Judy co-wrote a series of novels, published under the pseudonym “Susannah Kells”. These were A Crowning Mercy, published in 1983, Fallen Angels in 1984, and Coat of Arms (aka The Aristocrats) in 1986. (Cornwell’s strict Protestant upbringing informed the background of A Crowning Mercy, which took place during the English Civil War.) He also published Redcoat, an American Revolutionary War novel set in Philadelphia during its 1777 occupation by the British, in 1987.

After publishing 8 books in his ongoing Sharpe series, Cornwell was approached by a production company interested in adapting them for television. The producers asked him to write a prequel to give them a starting point to the series. They also requested that the story feature a large role for Spanish characters to secure co-funding from Spain. The result was Sharpe’s Rifles, published in 1987 and a series of Sharpe television films staring Sean Bean.

A series of contemporary thrillers with sailing as a background and common themes followed: Wildtrack published in 1988, Sea Lord (aka Killer’s Wake) in 1989, Crackdown in 1990, Stormchild in 1991, and a political thriller called Scoundrel in 1992.

In June 2006, Cornwell was made an Officer of the Order of the British Empire in the Queen’s 80th Birthday Honours List.

Cornwell’s latest work is titled Azincourt and was released in the UK in October 2008. The protagonist is an archer who participates in the Battle of Agincourt, another devastating defeat suffered by the French in the Hundred Years War. However Cornwell has stated that it will not be about Thomas of Hookton from The Grail Quest or any of his relatives. [Goodreads].

To know more about Bernard Cornwell and his work, there’s an excellent article on wikipedia, and great interviews and book trailers on his own website.

Set in A.D. 878, Cornwell’s splendid third Saxon novel (after The Pale Horseman and The Last Kingdom) chronicles the adventures of 21-year-old Saxon warrior Uhtred of Bebbanburg, who believes “my swords could win me the whole world.” Uhtred, who despite his Danish upbringing supported King Alfred of Wessex in the fight against the Danes in The Pale Horseman, helps free Guthred, an enslaved Dane, who proclaims himself king of Northumbria. “Fate is inexorable,” Uhtred constantly bemoans as he attempts to destroy such enemies as Kjartan the Cruel, Sven the One-Eyed and Ælfric (Uhtred’s thief of an uncle) and woos his beloved Gisela, Guthred’s Valkyrie-like sister. Uhtred must overcome many challenges, notably King Guthred’s shocking betrayal that leads to Uhtred’s spending two years as a shipboard slave. Cornwell, best known for his Sharpe series (Sharpe’s Battle, etc.), breathes life into ancient history with disarming ease, peppering it with humor and even innocence. (Jan.) [Publishers Weekly]