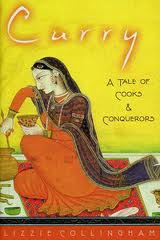 Curry: A Tale of Cooks and Conquerors

My sister is such an avid reader, so much more than I am, and she’s an excellent cook. Alas, she passed away since I originally published this post!
When she recommended me this book, I did not hesitate. And I was not disappointed at all.
This book is so delicious: a great mix of history, culture, and cuisine, including recipes.
It was fascinating to discover how the Indian cuisines, and be sure to notice the -s, evolved all along the centuries depending on the invaders in this or that region.
A very interesting point that the author makes is that if Indians incorporated ingredients brought home by invaders and colonists, and they sure did, they NEVER changed the way they cooked, and that makes the originality of Indian cuisine; for instance, potatoes were imported, but they would never be eaten just as boiled potatoes.
The book sounds very well researched, as for historical and cultural events, which made me discover this country from a very tasty angle.

There’s nothing like trying to represent the food of India on a two-page menu to raise tricky questions about authenticity and mass taste. Isn’t curry really a British invention? Does chicken tikka masala have anything to do with Indian food? Fortunately, Cambridge-trained historian Collingham supplies a welcome corrective: the cuisine of the Indian subcontinent has always been in glorious flux, and the popularity of chicken vindaloo on London’s Brick Lane or New York’s Curry Row (and beyond) is no simple betrayal of the cuisine. (As far as charges of cultural imperialism go, if it weren’t for the Portuguese, the chilli pepper never would have had its massive impact on the region’s delicacies.) Easy stratifications wilt in the face of fact: Hindu and Muslim culinary traditions have been intertwined at least as far back as the 16th-century Mughal emperor Akbar, and even caste- and religion-derived gustatory restrictions are often overridden by traditions tied to subregion. Collingham’s mixed approach is a delight: it’s not every cookbook that incorporates an exhaustive (indeed, footnoted) culinary history, and few works of regional history lovingly explain how to make a delicious Lamb Korma. Collingham’s account is generous, embracing complexity to create a richer exploration of the “exotic casserole” that conquered the world. [Publishers Weekly]

Lizzie Collingham, a Cambridge-trained historian, is a free-lance scholar and writer. She is the author of Imperial Bodies: The Physical Experience of the Raj.

This post is linked to Beth Fish Reads Weekend Cooking meme.
Click to find other great books related to food.

HAVE YOU READ THIS BOOK?
DO YOU FEEL LIKE READING IT?
ANY OTHER SIMILAR CULINARY/HISTORICAL BOOK YOU WOULD KNOW?
SHARE YOUR THOUGHTS  IN A COMMENT PLEASE

19 thoughts on “Curry: A Tale of Cooks and Conquerors”