Dreamers of the Day: A Novel 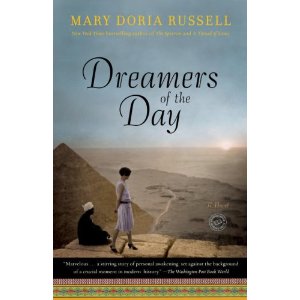 With prose as graceful and effortless as a seductive float down the Nile, Mary Doria Russell illuminates the long, rich history of the Middle East with a story that brilliantly elucidates today’s headlines.
Agnes Shanklin, a forty-year-old schoolteacher from Ohio, has come into a modest inheritance that allows her to take the trip of a lifetime to Egypt and the Holy Land. Arriving at the Semiramis Hotel just as the 1921 Cairo Peace Conference convenes, she is freed for the first time from her mother’s withering influence and finds herself being wooed by a handsome, mysterious German. At the same time, Agnes–with her plainspoken American opinions–is drawn into the company of Winston Churchill, T. E. Lawrence, and Lady Gertrude Bell, who will, in the space of a few days, redraw the world map to create the modern Middle East. As they change history, Agnes too will find her own life transformed forever.

Mary Doria Russell is the author of The Sparrow, Children of God, and A Thread of Grace. Her novels have won nine national and international literary awards, including the Arthur C. Clarke Award, the James Tiptree Award, and the American Library Association Readers Choice Award. The Sparrow was selected as one of Entertainment Weekly’s ten best books of the year, and A Thread of Grace was nominated for a Pulitzer Prize. Russell lives in Cleveland, Ohio. Contact her at http://www.MaryDoriaRussell.info.

On the heels of a family tragedy precipitated by the influenza epidemic of 1919, middle-aged spinster schoolteacher Agnes Shanklin inherits enough money to embark on the journey of a lifetime. Traveling to Egypt, she settles in at the Semiramis Hotel, where she meets and becomes involved with a number of members of the Cairo Peace Conference, including T. E. Lawrence (Lawrence of Arabia), Winston Churchill, and Lady Gertrude Bell. As these luminaries begin to carve up the Middle East, the unassuming Agnes wins the confidence of the conference attendees and attracts the attention of a dashing German spy. Narrated by Agnes from beyond the grave—a twist that is not revealed until the end of the book—this atmospheric entrée into a bygone time and place provides a first-person peek into the international political machinations that forged the contemporary Arab world. A natural for book-club discussions. –Margaret Flanagan –

I enjoy by Mary Doria Russell. She is as good and comfortable with science-fiction (see The Sparrow, and The Children of God)  as with historical fiction – see A Thread of Grace and now Dreamers of the Day.

In all of her books, she is especially good at character developing; can you ever forget Father Emilio if you read The Sparrow? I can’t.

For this present book, she seems to have done a fantastic research work on all the political events on the world scene of the time, with Churchill and even T. E. Lawrence. Having recently re-watched the famous movie made on him, I was first suspicious at finding him in here, and was afraid he would be presented in a too romantic way, but it seems Russell did a good honest work, same for Churchill!

And she managed to have all this included in a fascinating story of an almost nobody. – with some suspense as for the character of her mysterious German friend. Great job again for Russell!

I listened to it, I enjoyed the reader as well.

OR ANY OTHER BOOK BY MARY DORIA RUSSELL?

1 thought on “Dreamers of the Day”