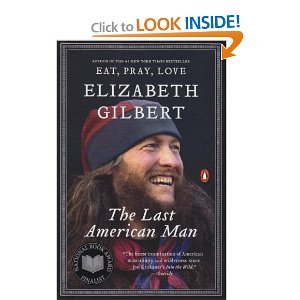 “By the time Eustace Conway was seven years old he could throw a knife accurately enough to nail a chipmunk to a tree.” Such behavior might qualify Eustace as a potential Columbine-style triggerman, but in Gilbert’s startling and fascinating account of his life, he becomes a great American countercultural hero. At 17, Conway “headed into the mountains… and dressed in the skins of animals he had hunted and eaten.” By his late 30s, Eustace owned “a thousand acres of pristine wilderness” and lived in a teepee in the woods full-time. He is, as Gilbert (Stern Men) implies with her literary and historical references, a cross between Davy Crockett and Henry David Thoreau. Gilbert, who is friends with Conway and interviewed his family, evidences enormous enthusiasm for her subject, whether discussing Conway’s need for alcohol to calm down; his relationship with a physically and emotionally abusive father; or his horrific hand-to-antler fight with a deer buck he was trying to kill yet she always keeps her reporter’s distance. At times, Conway’s story can be wonderfully moving (as when he buries kindergartners in a shallow trench with their faces turned skyward to help them understand that the forest floor is “alive”) or disconcerting (as when, in 1995, he’s uncertain about Bill Clinton’s identity). Gilbert has a jaunty, breathless style, and she paints a complicated portrait of American maleness that is as original as it is surprising.

Elizabeth Gilbert is the author of a short story collection, Pilgrims (a finalist for the PEN/Hemingway Award), and a novel, Stern Men. She is currently writer-at-large for GQ. Her journalism has been published in Harper’s Bazaar, Spin, and the New York Times Magazine, and her fiction has appeared in Esquire and the Paris Review.

In this rousing examination of contemporary American male identity, acclaimed author and journalist Elizabeth Gilbert explores the fascinating true story of Eustace Conway. In 1977, at the age of seventeen, Conway left his family’s comfortable suburban home to move to the Appalachian Mountains. For more than two decades he has lived there, making fire with sticks, wearing skins from animals he has trapped, and trying to convince Americans to give up their materialistic lifestyles and return with him back to nature. To Gilbert, Conway’s mythical character challenges all our assumptions about what it is to be a modern man in America; he is a symbol of much we feel how our men should be, but rarely are.

Interestingly, I’m attracted to that type of books these days: I read the book on John Muir [Search for Muir in this blog, on the left menu], and some time before watched The No Impact Man.

These 3 men try each in his own way, to connect deeply with mature and show us how to do so, for the survival of our planet and our own sanity.

I have developed the habit of listening to XM Bookradio while driving. One day, I heard this captivating excerpt, about a certain “Justus” – I thought thhis was the name of this guy. I sadly arrived at my destination before being able to catch the tile of the book. But, as I got back into my car after my errand, the excerpt was finishing, and the announcer revealed the title of the book.

I checked it out right away from my library, and discovered Eustace Conway, only a few years older than me.

I was fascinated by his experience, his return to nature, in the most extreme way, and am captivated by the experience going on right now at Turtle Island – there’s even a Facebook Page (type: Turtle Island Preserve) and visit their website.

I would be very tempted to even try a 14 months internship… even though the author does not hesitate showing Eustace in all his humanity, with his character problems. To say the least, she’s doing a great job at showing that heroes have their problems, like all of us.

It is a very informative and very true book.

1 thought on “The Last American Man”