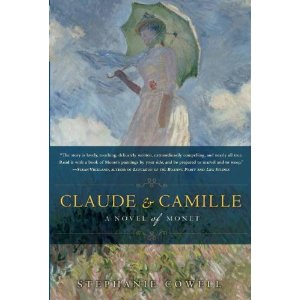 Claude & Camille:
A Novel of Monet

I listened to this audiobook with great pleasure. The author captures quite well the atmosphere surrounding the many artists in the very creative setting of Paris at the time. This is a romanced life of the painter, but based on actual facts as well, including the love of his life and his friends.

Being a painter myself, I enjoyed the descriptions of landscapes as they are translated on the canvas under the painter’s brush. It was fun going back to Monet’s paintings and seeing there Camille in person.

Sometimes he dreamt he held her; that he would turn in bed and she would be there. But she was gone and he was old. Nearly seventy. Only cool paint met his fingers. “Ma très chère . . .” Darkness started to fall, dimming the paintings. He felt the crumpled letter in his pocket. “I loved you so,” he said. “I never would have had it turn out as it did. You were with all of us when we began, you gave us courage. These gardens at Giverny are for you but I’m old and you’re forever young and will never see them. . . .”

In the mid-nineteenth century, a young man named Claude Monet decided that he would rather endure a difficult life painting landscapes than take over his father’s nautical supplies business in a French seaside town. Against his father’s will, and with nothing but a dream and an insatiable urge to create a new style of art that repudiated the Classical Realism of the time, he set off for Paris.

But once there he is confronted with obstacles: an art world that refused to validate his style, extreme poverty, and a war that led him away from his home and friends. But there were bright spots as well: his deep, enduring friendships with men named Renoir, Cézanne, Pissarro, Manet – a group that together would come to be known as the Impressionists, and that supported each other through the difficult years. But even more illuminating was his lifelong love, Camille Doncieux, a beautiful, upper-class Parisian girl who threw away her privileged life to be by the side of the defiant painter and embrace the lively Bohemian life of their time.

His muse, his best friend, his passionate lover, and the mother to his two children, Camille stayed with Monet—and believed in his work—even as they lived in wretched rooms, were sometimes kicked out of those, and often suffered the indignities of destitution. She comforted him during his frequent emotional torments, even when he would leave her for long periods to go off on his own to paint in the countryside.

But Camille had her own demons – secrets that  Monet could never penetrate, including one that when eventually revealed would pain him so deeply that he would never fully recover from its impact. For though Camille never once stopped loving the painter with her entire being, she was not immune to the loneliness that often came with being his partner.

A vividly-rendered portrait of both the rise of Impressionism and of the artist at the center of the movement, Claude and Camille is above all a love story of the highest romantic order.

STEPHANIE COWELL is the author of Nicholas Cooke: Actor, Soldier, Physician, Priest; The Physician of London (American Book Award 1996) and The Players: A Novel of the Young Shakespeare. She is the also the author of Marrying Mozart, which was translated into seven languages and has been optioned for a movie. Visit her at http://www.stephaniecowell.com and http://everydaylivesfrenchimpressionists.blogspot.com.

“Once again the acclaimed novelist Stephanie Cowell deftly takes us into the world of the classical arts with her well researched and beautifully written novel of historical fiction, Claude & Camille.”–LA Times Book Examiner 5 Stars (Examiner.com)

“Cowell is nothing short of masterful in writing about Claude Monet’s life and love….An enthralling story, beautifully told.”–The Boston Globe

“With elegant prose that blends color, light, and shadow to perfection, much as Monet did in his canvasses, Stephanie Cowell offers us a gorgeously rendered tale of love, genius, and haunting loss set against the dramatic backdrop of a world on the verge of inescapable change.”—C.W. Gortner, author of The Last Queen